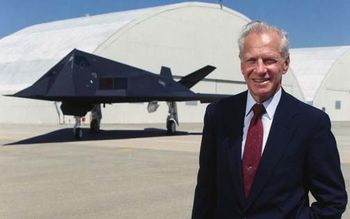 Rich was born in Manila in the Philippines, one of the five children of British lumber mill superintendent Isidore Rich and his French wife, Annie, the daughter of one of his paternal grandfather's Jewish customers who resided in Alexandria, Egypt. The Rich family was one of the first Jewish families to settle in Manila. Having fled the Philippines just weeks before the Japanese attack on Pearl Harbor, they moved to the United States in 1942, where Rich became a naturalized US citizen. He worked (with his father) in a Los Angeles, California machine shop during World War II, and studied at the city's Hamilton High School. After the war he started his college education when he was 21, majoring in mechanical engineering at UC Berkeley, followed by a master's degree in aeronautical engineering at UCLA, instead of in the medical field as he originally planned.[2]

Upon graduation Rich was hired by Lockheed as a thermodynamicist. There he worked on a variety of projects - he was awarded a patent for designing a nichrome heating system which prevented Navy patrol plane crew members' penises from freezing to their urine elimination pipes. He designed inlet ducts for the F-104 Starfighter, the C-130 transport aircraft, and the F-90 fighter.

In December 1954 Rich was transferred to the Skunk Works, the secret research and development section run by Lockheed's Chief Engineer, Clarence "Kelly" Johnson. There he designed the inlet ducts for the U-2 spy plane, then next led the effort to design and build a large-scale hydrogen liquefaction plant for project Suntan, a proposed hydrogen-powered supersonic very high-altitude aircraft meant to replace the U-2. After Suntan was canceled, hydrogen proving to be impractical for a number of reasons, Rich became propulsion systems program manager for the U-2's successors, the A-12 and the SR-71 Blackbird. Rich was chief aerodynamicist for the projects, designer of the complex translating shock cones inlet design, air conditioning and heat management systems, and the specification of the aircraft's black skin coatings which optimized heat dissipation of their tremendous aerodynamic heating as well as incorporating materials to reduce radar signature – the aircraft incorporated a number of features of what would later be referred to as low observables or stealth technology. Later, as Johnson's successor as leader of the Skunk Works, Rich championed and directed the early experimental prototypes of stealth technology and led the development of the F-117 stealth fighter.

A member of the National Academy of Engineering, he won numerous awards during his career, including the Collier Trophy. In 2005 he was inducted into the National Aviation Hall of Fame. In January 1981, he received the Department of Defense Medal for Distinguished Public Service for his work on the then-still-classified stealth airplane, in a secret ceremony in the office of then-Secretary of Defense Harold Brown.[3] He was allowed to show the medal to his two children, Karen and Michael, but was not allowed to tell them why he had received it.[4]

In 1950, he married the former Faye Mayer, a fashion model, who died in 1980. In 1982, he married Hilda Elliot. He died of cancer in Ventura, California, on January 5, 1995. His son, Michael, is an executive with the RAND Corporation and his daughter, Karen, is a botanist.