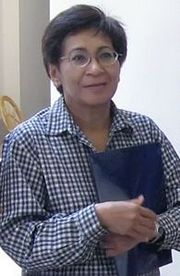 Mazlan Binti Othman is a Malaysian astrophysicist who has served in several roles within her country, and as Director of the United Nations Office for Outer Space Affairs in Vienna.[1]

Born in Seremban, Malaysia, Othman attended Tunku Kurshiah College, a boarding school in Seremban, Negeri Sembilan. Her aptitude for mathematics led to enrollment in a science curriculum, and though her family encouraged her to become a physician, she decided to pursue physics instead. She attended University of Otago in New Zealand on a Colombo plan scholarship, earning a BSc. (honors) in 1975. She joined the National University of Malaysia (UKM) as a tutor, but negotiated an extension to her scholarship and returned to Otago, earning her Ph.D. in physics in 1981 - the first woman to do so since the University was founded in 1869.[2]

Othman returned to Malaysia as the country's first astrophysicist, and worked to create a curriculum in astrophysics at the national university, as well as to build public awareness and understanding of astronomy and space issues. She also performed research for a semester at the Kiso Observatory in Japan.[3]

Her interest in public education was rewarded in 1990 when Prime Minister Mahathir bin Mohamad, a strong supporter of education and science, placed her in charge of the Planetarium Division of the Prime Minister's Department, overseeing development of Planetarium Negara, Malaysia's national planetarium in Kuala Lumpur.[4] After the planetarium opened in 1993, Othman was made Director General of the government's new Space Science Studies Division, where she launched a microsatellite development program. She received a full professorship the following year.

In November 1999, Kofi Annan, Secretary-General of the United Nations, appointed Othman as Director of the United Nations Office for Outer Space Affairs (UNOOSA) in Vienna.[5] At the request of Prime Minister Mahathir, she returned to Malaysia in July 2002 to serve for five years as the founding Director General of Angkasa, the Malaysian National Space Agency, where her work led to the launch of the first Malaysian astronaut, Sheikh Muszaphar Shukor.

Othman was reappointed as UNOOSA director in 2007 by Secretary-General Ban Ki-moon, and left Angkasa to return to the post that December.[6] At UNOOSA she deals with issues of international cooperation in space, prevention of collisions and space debris, use of space-based remote sensing platforms for sustainable development, coordination of space law between countries, and the risks posed by near-earth asteroids, among other topics.

In September 2010, several news sources reported the United Nations would soon appoint Othman to be the ambassador for extraterrestrial contact,[7][8] apparently basing their claims on remarks she made suggesting that the UN coordinate any international response to such contact, and her scheduled appearance on a Royal Society panel that October, "Towards a scientific and societal agenda on extra-terrestrial life."[9] However, a UN spokesperson dismissed the reports as "nonsense," saying there was no plan to expand the mandate of UNOOSA,[10] and in an email to The Guardian, Othman stated, "It sounds really cool but I have to deny it."[11] She later explained that her talk would illustrate how extra-terrestrial affairs could become a topic of discussion at the UN, using as an example the advocacy that led to UN discussion of near-Earth objects and space debris.[12]

Also in 1997, Othman's alma mater, the University of Otago, awarded her the degree of Honorary Doctor of Science.[14]

In 2009, for "her work in developing astronomy education in Malaysia and her leading national and international role in space science," the Institute of Physics awarded Othman its President's Medal.[15]