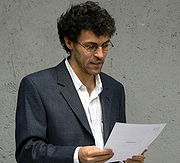 At the end of 1990, Alcubierre moved to Wales to attend graduate school at the University of Wales, Cardiff. He received his Ph.D. in the area of Numerical relativity in 1994. After leaving Wales in 1996, he worked at the Max Planck Institute for Gravitational Physics in Potsdam, Germany, where he developed new numerical techniques to describe the physics of black holes. Since 2002, he has worked at the Nuclear Sciences Institute of the National Autonomous University of Mexico (UNAM), where he conducts research in numerical relativity, employing computers to formulate and solve the physical equations first proposed by Albert Einstein.[1]

Alcubierre's solitary wave solutions of the Einstein field equations offer the unexpected possibility that general relativity may prove consistent with the experimentally verified non-locality of quantum mechanics. This assuages the anticipation that quantum, non-locality would ultimately require abandoning the mathematical structure of relativity.

Alcubierre is best known for his May 1994 paper "The Warp Drive: Hyper-fast travel within general relativity" (which appeared in the science journal Classical and Quantum Gravity). In this, he describes the Alcubierre drive, a theoretical means of traveling faster than light that does not violate the physical principle that nothing can locally travel faster than light.

In his paper, he reversed the regular way general relativity is applied; instead of going from massive objects to space-time curvature, he constructed a model that could transport a volume of flat space inside a "bubble" of highly curved space, much like a crease in a sheet. This bubble is driven forward by a purely local expansion of space-time behind it, and an opposite contraction in front of it. In this way, a spaceship will be pushed away from the Earth and pulled towards a distant star by space-time itself. One can then invert the process to come back to Earth, taking an arbitrarily small time to complete the round trip. As a result, motion faster than light as seen by observers outside this disturbed region is possible. Faster than light velocity would be possible because the starship would be, strictly speaking, stationary (relative to the space of its bubble) while space-time itself would be moving.

The key to generate a distortion of spacetime like that is the so-called "exotic matter". Exotic matter has the provoking property of having negative energy density. (While two "normal" particles would attract each other by their gravity, an exotic particle would repel a "normal" particle.)

Miguel Alcubierre also made a special appearance on the TV production "How William Shatner Changed the World", in which his warp bubble theory was discussed. Further mentioned on the Star Trek Memory Alpha article http://www.memory-alpha.org/en/index.php/How_William_Shatner_Changed_the_World