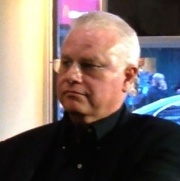 Whitley Strieber (ˈstriːbər; born June 13, 1945) is an American writer best known for his horror novels The Wolfen and The Hunger and for Communion, a non-fiction account of his perceived experiences with non-human entities. Strieber also co-authored The Coming Global Superstorm with Art Bell, which inspired the blockbuster film about sudden climate change, The Day After Tomorrow.

Whitley Strieber was born Louis Whitley Strieber in San Antonio, Texas, the son of Karl Strieber, a lawyer and Mary Drought Strieber. He attended Central Catholic Marianist High School in San Antonio, Texas. He was educated at the University of Texas at Austin and the London School of Film Technique, graduating from both in 1968. He then worked for several advertising firms in New York City, rising to the level of vice president before quitting in 1977 to become a free-lance writer.

Strieber began his career as a novelist with the horror novels The Wolfen (1978) and The Hunger (1981), both of which were later made into movies, followed by the less successful horror novels Black Magic (1982) and The Night Church (1983).

Strieber then turned to speculative fiction. He wrote Warday (1984), about the dangers of limited nuclear warfare and Nature's End (1986), a novel about environmental apocalypse, collaboratively with James Kunetka. He is also the author of Wolf of Shadows (1985), a young adult novel set in the aftermath of a nuclear war.

In 1986, Strieber's fantasy novel Catmagic was published, co-authored with Jonathan Barry, who was billed as an aerospace industry consultant and a practicing witch. In the 1987 paperback edition, Strieber states that Jonathan Barry is fictitious and that he is the author of Catmagic. Strieber's personal publishing company, Walker & Collier, is named after two of the characters in Catmagic.

He later returned to the vampire saga that began with The Hunger, adding The Last Vampire (2001) and Lilith's Dream (2002) to the story.

His novel of alien abduction The Grays (2006) makes use of his experiences of the phenomenon.

Communion and "The Visitors"

On December 26, 1985, Strieber reportedly had an experience in which he believed he was abducted from his cabin in upstate New York by non-human beings. He wrote about these experiences in his first non-fiction book, Communion (1987). The book is generally interpreted as a claim of alien abduction but Strieber says that he draws no conclusions about the nature of his experience. He refers to the beings as "the visitors," a name chosen to be as neutral as possible and leaves open the possibility that they are not extraterrestrials and that they exist in his mind. He has repeatedly expressed his frustration with what he feels are fantastic claims incorrectly attributed to him.

Strieber went on to write three more autobiographical books about his experiences with the visitors, Transformation (1988), Breakthrough (1995) and The Secret School (1996).

Other visitor-themed books of Strieber's include Majestic (1989), a novel about the Roswell UFO incident and The Communion Letters (1997, reissued in 2003), a collection of letters from readers reporting experiences similar to Strieber's. Confirmation (1998), despite its title does not propose that there has been 'confirmation' of UFOs or abductions. It analyses the evidence and discusses what more would be required to provide 'confirmation'. A 2006 novel, The Grays, presented his impression of alien contact through a fictional narrative.

Strieber wrote the screenplay for the 1989 film Communion, directed by Philippe Mora and starring Christopher Walken as Strieber. The movie covers material from the novel Communion and a sequel Transformation and which has themes not present in the books.

The Master of the Key

In the pre-dawn hours of June 6, 1998, Strieber was reportedly visited in his Toronto hotel room by a mysterious but apparently human man, who delivered an unsolicited lecture covering various subjects from spirituality to the environment. The man gave no name but Strieber has taken to referring to him as the "Master of the Key." Strieber first reported the visit in his online journal in 1998 and later gave a more complete account in his self-published book The Key (2001). Skeptics have pointed out that The Key and the 1998 journal entries give different (not contradictory but non-overlapping) accounts of what the man said.

Before publishing The Key, Strieber co-authored The Coming Global Superstorm (1999), a book about the possibility of rapid and destructive climate change with Art Bell. He has said that it was based largely on things the Master of the Key had told him about the environment. The book served as the inspiration for the disaster film The Day After Tomorrow (2004) and Strieber later wrote a novelization of that movie.

Another recent book Strieber says was inspired by the teachings of the Master of the Key is the self-published The Path (2002), which deals with the symbolism of the Tarot of Marseilles.

Whitley Strieber is currently the host of the paranormal and edge science-themed internet podcast, Dreamland, available on a weekly basis from his website, UnknownCountry.com. The program was a former companion show to Coast to Coast AM, with both shows founded by broadcaster Art Bell, before being taken on by Strieber in 1999.

Strieber has also returned to writing fictional novels in recent years, including The Last Vampire (2001), and Lilith's Dream (2003), both being sequels to his 1981 vampire novel The Hunger. As well, he has authored 2012: The War For Souls (2007), a horror novel about an interdimensional invasion, and Critical Mass (2009), a thriller about nuclear terrorism. Strieber also co-authored the graphic novel The Nye Incidents (2008), along with co-authors Craig Spector and Guss Floor.

His next novel, The Omega Point, is a fictional novel "based on a hidden connection between 2012 and the Book of Revelation"[1]. This title is due for release in 2010.

He makes a cameo appearance in the 2009 movie Race to Witch Mountain.

In the TV series Babylon 5, there is an alien race that is similar to the Greys in Communion. This race is named the Strieb after Whitley Strieber.

Swedish Progressive Metal band Evergrey wrote their 2001 concept album, In Search of Truth, around the ideas presented in "Communion" after the band's singer Tom S. Englund read the book.

Whitley Streiber is currently a practicing Catholic. He was also formerly associated with the Gurdjieff Foundation. He left the Foundation shortly before the experiences reported in Communion but remains interested in the mystical teachings of G. I. Gurdjieff and P. D. Ouspensky and makes frequent references to them in his non-fiction writings.

Strieber is married to Anne Strieber. They have a son, Andrew, who appears in Communion and several of Strieber's novels (for example, Warday).