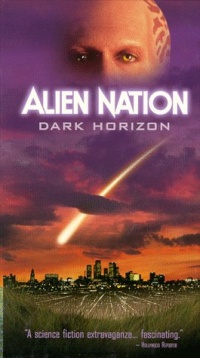 Alien Nation (TV series) is a television show from the Fox Network which lasted a single season, ending in 1990 with a cliffhanger series finale. Dark Horizon was written to be the season opener for the second season, but when the series was unexpectedly canceled and looked like it might never return to television, the plot was published as a book. Finally, four years later (after a change in management at Fox), Alien Nation: Dark Horizon (original airdate: October 25, 1994) appeared as a television movie to pick up where the television series left off.

Alien Nation: Dark Horizon was written by Andrew Schneider and Diane Frolov, and was directed by Kenneth Johnson.

In a recapitulation of the series cliffhanger, Alien Nation: Dark Horizon begins with Susan Francisco and her daughter Emily falling victim to a newly developed bacterial infection that was created by a group of human Purists to exterminate the Newcomer species. There is also a new sub-plot running parallel to this one, the story of Ahpossno, a Tenctonese Overseer who lands on Earth to find any surviving Tenctonese and bring them back into slavery. The idea of a signal sent into space by the surviving Overseers was explored in the Alien Nation episode Contact.