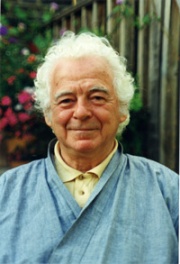 Benjamin Creme (b. Dec 5 1922 Scotland) is an artist, author, self proclaimed esotericist, and owner of Share International magazine (his regular newsletter and website).[1][2]

He asserts that the second coming prophesied by many religions will come in the form of "Maitreya". Maitreya is the name Buddhists use for the future Buddha, but Creme claims that Maitreya is the teacher that all religions point towards and hope for . Other names for him, according to Creme, are the Christ, the Imam Mahdi, Krishna, and the Messiah. Creme says Maitreya is the "Avatar for the Aquarian Age" and is currently living in London.[3][4][5]

Creme has made a number of predictions and announcement for the imminent appearance of Maitreya based on his claims of receiving telepathic messages. These have failed to come true, leading to him being considered a figure of amusement in the press.[6][7][8]

Benjamin Creme was a member of the Aetherius Society (a UFO based new religious movement) between 1957 and 1959, when he left due to disagreements.[9]

He first began to speak publicly of his mission on May 30th, 1975, at the Friends Meeting House on Euston Road in London, England. On some of his radio show interviews, he generated controversy by alleged positive remarks about Lucifer. Creme explained that he was not endorsing the Devil but pointing out a misinterpretation in terminology, he stated "Lucifer is the name of a great Angel, not an upstart in heaven who revolted against God and was put down into the nether regions as the Devil. That is a complete misinterpretation. Lucifer means light, and comes from the Latin lux, lucis, meaning light. It is the name of the Angel Who ensouls the human kingdom..."[10] Some Christian Evangelical sources have accused Creme and his claims regarding Maitreya of being a satanical conspiracy.[11]

1982 and 1997 failed television broadcasts from Christ

In the spring of 1982 Creme placed advertisements in newspapers around the world saying, "The Christ is now here". According to Creme the "Christ", whom he also called "Maitreya", would announce his existence on world wide television broadcasts, and that he would do that on Monday, 21 June 1982. This created a sensation within some New Age groups, and even among some Evangelical Christians; but, when the promised television broadcasts of the Maitreya/Christ failed to occur, most of Creme's followers lost interest. This, he said, was because Maitreya had seen the time was not right for his general acceptance, at the level necessary, for his work to be successful. Creme, who claims that time is now very near for Maitreya's emergence, is independently wealthy and continues to fund newspaper advertisements and press conferences, as well as to fund his journal and websites.[12][13]

Creme stated that when the "Day of Declaration" occurs, "The Christ will come on the world's television channels, linked together by satellite. All those with access to television will see... [His face]. He will establish a telepathic rapport with all humanity simultaneously".[14] While the Christ is speaking... [everyone will feel far more love than they've ever felt before, that massive outpouring of love will cause] hundreds of thousands of 'miracle' cures will take place simultaneously."

In 1997 Creme made similar predictions that Maitreya would appear on television and be interviewed around the world. This time there was far less media interest.[15]

In 2010, several clues revealed by Creme led his followers to identify British-American journalist and author Raj Patel as Maitreya. Patel's stumbling over a few words during an interview on The Colbert Report seemed to clinch it, although Creme himself has made no statement on his followers' conclusions.[16]

During an interview in 2006, Creme confirmed his views on the importance of crop circles: "The UFOs have an enormous part to play in the security of this planet at the ecological level. [The crop circles are part of] a new science that will give us energy directly from the sun. Oil will become a thing of the past. No one will be able to sell energy in the future."[17]

Creme has explained how crop circles are made by UFOs in his newsletter: "The crop circles are there to draw attention to the fact that the Space Brothers are there. They are amazing constructions. They are made seconds by the ‘ships’ of the Space Brothers. They are complex and beautiful constructions which cannot be made in any other way. They appear all over the world but the majority are in the south of England. Why? Because Maitreya is in London."[4]