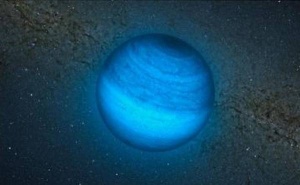 CFBDSIR 2149-0403 has been discovered by the Canada-France Brown Dwarfs Survey, a near infrared sky survey, and confirmed by WISE data.

As of November 2012, this rogue planet is the closest that has ever been spotted.[2] If the object belongs to the AB Doradus moving group then its distance is estimated to be 40±4 parsecs (130±13 light years) from Earth; other possible estimates range from 25 to 50 parsecs.

Spectroscopy observations have found absorption by gaseous methane and water.