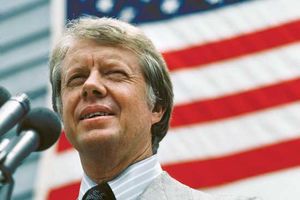 The Jimmy Carter UFO Incident is the name given to an incident in which Jimmy Carter (US President 1977-1981) reported seeing an unidentified flying object while at Leary, Georgia, in 1969.

While governor of Georgia, Carter was asked to file a report of the sighting by the International UFO Bureau in Oklahoma City, Oklahoma, which he did in September 1973.[1] Since its writing, the report has been discussed several times by both ufologists and by members of the mainstream media.[2][3] Carter does not think that it was an alien spacecraft.

One evening in 1969, two years before he became governor of Georgia, Carter was preparing to give a speech at a Lions Club meeting. At about 7:15 p.m (EST), one of the guests called his attention to a strange object that was visible about 30 degrees above the horizon to the west of where he was standing. Carter described the object as being bright white and as being about as bright as the moon. It was said to have appeared to have closed in on where he was standing but to have stopped beyond a stand of pine trees some distance from him. The object is then said to have changed color, first to blue, then to red, then back to white, before appearing to recede into the distance.

Carter felt that the object was self-luminous, but not a solid in nature. Carter's report indicates that it was witnessed by about ten or twelve other people, and was in view for ten to twelve minutes before it passed out of sight.[1][3]

"There were about twenty of us standing outside of a little restaurant, I believe, a high school lunch room, and a kind of green light appeared in the western sky. This was right after sundown. It got brighter and brighter. And then it eventually disappeared. It didn't have any solid substance to it, it was just a very peculiar-looking light. None of us could understand what it was."

Speaking in a 2005 interview, Carter states:

"all of a sudden, one of the men looked up and said, 'Look, over in the west!' And there was a bright light in the sky. We all saw it. And then the light, it got closer and closer to us. And then it stopped, I don’t know how far away, but it stopped beyond the pine trees. And all of a sudden it changed color to blue, and then it changed to red, then back to white. And we were trying to figure out what in the world it could be, and then it receded into the distance." [3]

Date of the sighting

The exact date on which the sighting occurred has been called into question by investigators. According to the report that he filed with the International UFO Bureau four years after the incident, Carter saw the UFO in October 1969. However investigators have cited Lions Club records as evidence that it occurred nine months earlier Template:Harvcol.

According to an investigation carried out in 1976, some seven years after the event, most of those present at the meeting either did not recall the event, or did not recall it as being anything important. According to Fred Hart, the only guest contacted who remembered seeing the object: "It seems like there was a little—like a blue light or something or other in the sky that night—like some kind of weather balloon they send out or something ... it had been pretty far back in my mind." Template:Harvcol.

While puzzled by the object and its origins Carter, himself, later said that while he had considered the object to be a UFO—on the grounds it was unexplained—his knowledge of physics had meant he had not believed himself to be witnessing an alien spacecraft.[3]

On January 6, 1969 the sky was clear in Leary and the planet Venus was near its maximum brightness and in the direction described by Carter. Ufologist Robert Sheaffer concluded that the object that Carter witnessed was a misidentification of Venus[4] Template:Harvcol. Ufologist Allan Hendry did calculations and agrees with the assessment of it being Venus Template:Harvcol. This could also be the Venus "Halo" [1], as was discussed on The Skeptics' Guide to the Universe podcast #105[5] in a 2007 interview with Jimmy Carter. In the interview Carter stated that he did not believe the object was Venus, explaining that he was an amateur astronomer and knew what Venus looked like. He also said that as a scientist he did not believe it was an alien craft and at the time assumed it was probably a military aircraft from a nearby base. However, he said that the object did not make any sound like a helicopter would do. Carter also said that he did not believe that any extraterrestrials have visited Earth. He also stated he knows of no government cover-up of extraterrestrial visits and that the rumors that the CIA refused to give him information about UFOs are not true.

The sighting is said to have had a personal impact on Carter and his perception of UFO and UFO sightings. During his 1976 election campaign, he is said to have told reporters that, as a result of it, he would institute a policy of openness if he were elected to office, saying:

"One thing's for sure, I'll never make fun of people who say they've seen unidentified objects in the sky. If I become President, I'll make every piece of information this country has about UFO sightings available to the public and the scientists." [6]

Despite his earlier pledge, once elected, Carter distanced himself from disclosure, citing "defense implications" as being behind his decision.[7]

While governor of Georgia, Carter was asked to file a report of the sighting by the International UFO Bureau in Oklahoma City, Oklahoma, which he did in September 1973.

Describing the incident, he said, “There were about twenty of us standing outside of a little restaurant, I believe, a high school lunch room, and a kind of green light appeared in the western sky. This was right after sundown. It got brighter and brighter. And then it eventually disappeared. It didn’t have any solid substance to it, it was just a very peculiar-looking light. None of us could understand what it was.”

Ufologist Robert Sheaffer concluded that the object that Carter witnessed was a misidentification of Venus.

Early reports in the media