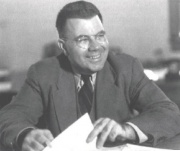 Edward Uhler Condon (March 2, 1902 – March 26, 1974) was a distinguished American nuclear physicist, a pioneer in quantum mechanics, a participant in the development of radar and nuclear weapons in World War II, research director of Corning Glass, director of the National Bureau of Standards, and president of the American Physical Society (as well as, late in his life, professor of physics at the University of Colorado, where he directed a controversial Air Force-funded scientific study of UFOs).

He was born in Alamogordo, New Mexico, United States, and earned a Ph.D. from University of California, Berkeley in 1926.

In 1943, Condon joined the Manhattan Project; however, within six weeks, he resigned as a result of conflicts with General Leslie R. Groves, the project's military leader.

Condon was one of the physicists whose loyalty to the United States was challenged by members of Congress — including Congressman Richard M. Nixon, who called for the revocation of his security clearance — in the late 1940s and early 1950s. The superpatriotic chairman of the House Committee on Un-American Activities (HUAC), Rep. J. Parnell Thomas, would call the physicist "Dr. Condom," the "weakest link" in American security, and even the "missing link."

In 1948, U.S. President Harry Truman — at the Annual Meeting of the American Association for the Advancement of Science, and with Condon sitting beside him — denounced Rep. Thomas and HUAC on the grounds that vital scientific research "may be made impossible by the creation of an atmosphere in which no man feels safe against the public airing of unfounded rumors, gossip and vilification." He called HUAC's activities "the most un-American thing we have to contend with today. It is the climate of a totalitarian country." Condon later resigned from the AAAS when they published an unflattering account of his involvement in Project Blue Book that involved firing individuals on the project and claiming they were disloyal See Condon Report.

Condon replied that the accusation was unfounded, since he most emphatically was not a "revolutionary". He raised his right hand and solemnly declared, "I believe in Archimedes' Principle, formulated in the third century B.C. I believe in Kepler's laws of planetary motion, discovered in the seventeenth century. I believe in Newton's laws...." He continued in this vein, listing a long sequence of scientists whose work, done centuries before, was still valid and respected: The Bernoulli family, Fourier, Ampère, Boltzmann, and Maxwell. HUAC did not appreciate his sense of humor; however, fortunately for Condon, the most severe charge they could confirm was that in high school he had a paper route delivering a socialist newspaper.

From 1966 to 1968, Condon directed the University of Colorado UFO Project. Though plagued with infighting and controversy, the project's conclusion—that all unidentified flying objects had prosaic explanations—has been cited as a key factor in the generally low levels of interest in UFOs among most mainstream scientists and academics. See Condon Report. In his negative critique of the Condon Report, astronomer J. Allen Hynek hoped that Condon's reputation would not be soured by the Condon Report, writing, "It is unfortunate that, almost certainly, popular history will henceforth link Dr. Condon’s name with UFOs, and only the arcane history of physics will accord him his true place and record his brilliant career in contributing to the understanding ... of the nature of the physical world. These contributions UFOs cannot take away from him, even though his work with this problem is analogous to that of a Mozart producing an uninspired pot-boiler, unworthy of his talents." (Clark, 605)

The crater Condon on the Moon is named after him.