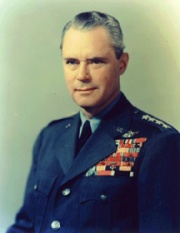 Hoyt Sanford Vandenberg (January 24, 1899 – April 2, 1954) was a U.S. Air Force general, its second Chief of Staff, and the Director of the Central Intelligence Agency.

Vandenberg was briefly the U.S. Chief of Military Intelligence during World War II, but his primary duty was as commanding general of the Ninth Air Force, a tactical air force in England and in France, supporting the Army, from August 1944 until V-E Day. Vandenberg Air Force Base on the central coast of California is named for General Vandenberg. He is also the nephew of Arthur H. Vandenberg, a former U.S. Senator from Michigan.

The general was born at Milwaukee, Wisconsin.[1] He grew up in Lowell, Massachusetts, spending his teenage years there. He graduated from the United States Military Academy on June 12, 1923, and was commissioned a second lieutenant in the Air Service.

His first assignment was with the Third Attack Group at Kelly Field, where he assumed command of the 90th Attack Squadron. In 1927, he became an instructor at the Air Corps Primary Flying School at March Field, Calif. He went to Schofield Barracks, Hawaii, in May 1929, to join the Sixth Pursuit Squadron, and assumed command of it the following November.

Returning in September 1931, he was appointed a flying instructor at Randolph Field, Texas, and became a flight commander and deputy stage commander there in March 1933. He entered the Air Corps Tactical School at Maxwell Field, Alabama, in August 1934, and graduated the following June. Two months later he enrolled in the Command and General Staff School at Fort Leavenworth, Kansas, and completed the course in June 1936. He then became an instructor at the Air Corps Tactical School at Maxwell Field, where he taught until September 1936, when he entered the Army War College.

After graduating from the War College in June 1939, General Vandenberg was assigned to the Plans Division in the Office of the Chief of Air Corps. A few months after the United States entered World War II, he became operations and training officer of the Air Staff. For his services in these two positions he received the Distinguished Service Medal.

In June 1942, General Vandenberg was assigned to the United Kingdom and assisted in the organization of the Air Forces in North Africa. While in Great Britain he was appointed the chief of staff of the Twelfth Air Force, which he helped organize. On February 18, 1943, General Vandenberg became the chief of staff of the Northwest African Strategic Air Force (NASAF) which was under the command of Major General James Doolittle. NASAF was the strategic arm of the new Northwest African Air Forces (NAAF) under Lieutenant General Carl Spaatz. With NASAF, Vandenberg flew on numerous missions over Tunisia, Pantelleria, Sardinia, Sicily, and Italy. He was awarded both the Silver Star and the Distinguished Flying Cross for his services during this time. For his organizational ability with the 12th Air Force and his work as chief of staff of the NASAF he was awarded the Legion of Merit.

In August 1943, Vandenberg was assigned to Air Force headquarters as Deputy Chief of Air Staff. In September 1943 he became head of an air mission to Russia, under Ambassador Harriman, and returned to the United States in January 1944.

In March 1944, He was transferred to the European theater, and in April 1944, was designated the Deputy Air Commander in Chief of the Allied Expeditionary Forces and the Commander of its American Air Component.

In August 1944, General Vandenberg assumed command of the Ninth Air Force. On November 28, 1944, he received an oak leaf cluster to his Distinguished Service Medal for his part in planning the Normandy invasion.

He was appointed the Assistant Chief of Air Staff at the Army Air Forces (USAAF) headquarters in July 1945.

In January 1946, he became director of Intelligence on the War Department general staff where he served until his appointment in June 1946, as Director of Central Intelligence.

General Vandenberg returned to duty with the Air Force in April 1947, and on 15 June 1947, became the Deputy Commander in Chief of the Air Staff.

Following the division of the United States Department of War into the Departments of the Army and the Air Force, Lieutenant General Vandenberg was designated the Vice Chief of Staff of the Air Force on October 1, 1947, and promoted to the rank of General.

Even when he was at the pinnacle of his military career, General Vandenberg’s boyish good looks and outgoing personality often made him the target of attacks on his credibility and experience. But the attention that his appearance brought on wasn’t all bad, having appeared on the covers of TIME and LIFE magazine. The Washington Post once described him as “the most impossibly handsome man on the entire Washington scene,” and Marilyn Monroe once named Vandenberg, along with Joe DiMaggio and Albert Einstein, as one of the three people with whom she would want to be stranded on a deserted island.

On April 30, 1948, General Vandenberg became the Chief of Staff of the United States Air Force, succeeding General Carl Spaatz. He was renominated by President Harry S. Truman for a second term as Air Force Chief of Staff on March 6 1952. The nomination was confirmed on April 28 1952, with Vandenberg serving until June 30 1953.

A controversy arose while he was the Air Force Chief of Staff, when he opposed the Secretary of Defense Charles Erwin Wilson on a proposed $5 billion budget reduction for the Air Force. General Vandenberg maintained that the cut backed by Wilson would reduce U.S. military aviation to a "one-shot Air Force", inferior to that of the Soviet Union. He said it was another instance of "start-stop" planning of a kind that had impeded Air Force development in previous years. The cut in appropriations went into effect in July 1953, immediately after his retirement from the Air Force.

A scratch golfer, General Vandenberg spent every free moment on the golf courses, but he was also a lover of movies, Westerns, and scotch. Unfortunately, his last months in uniform were painful, unhealthy ones. General Vandenberg retired from active duty as a result of major illness on June 30 1953, and died nine months later at the Walter Reed Army Medical Center from prostate cancer at the age of 55. His remains are buried in Section 30 of the Arlington National Cemetery.

His wife, Gladys Rose Vandenberg, started the concept of the "Arlington Ladies" while he was Air Force Chief of Staff. The program provides that a military lady of the appropriate service represents the service chief at all military funerals at Arlington Cemetery. She was buried alongside her husband in Arlington National Cemetery upon her death on January 9 1978. They are survived by their children, Gloria Miller, and retired Major General Hoyt S. Vandenberg, Jr., USAF.

On October 4 1958, the missile and aerospace base at Cooke AFB in Lompoc, California, was renamed the Vandenberg Air Force Base. In July 1963, the instrument ship USAF General Hoyt S. Vandenberg (T-AGM-10) was renamed at Cape Canaveral, Florida, for duty on the Eastern Space and Missile Range in the Atlantic. One of the two cadets' dormitories at the United States Air Force Academy is also named in his honor. In addition, a popular enlisted "hangout" for technical school Airmen at Keesler AFB, Mississippi, is named in his honor. The Vandenberg Esplanade, located along the Merrimack River in Lowell, Massachusetts and part of the Lowell Heritage State Park, is named in his honor.

The Manuscript Collection of Hoyt S. Vandenberg at the Library of Congress as of November 2005 is Classified.