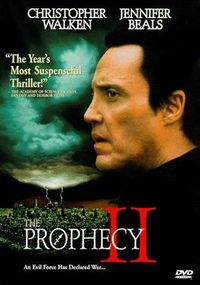 Lucifer (Guri Weinberg) ejects Gabriel from Hell, claiming the War of Heaven isn't his to fight and Hell isn't big enough for both of them. Gabriel's new mission is to prevent the birth of a child, a nephilim, the offspring of an angel and a human. The coming of this child, said to precede reconciliation between the warring factions in heaven, has been prophesied by Thomas Daggett, now a monk. The child's conception takes place when Valerie, a nurse, is seduced by an attractive stranger (the angel Danyael) whom she hit with her car. She finds a few days later that she is pregnant.

Gabriel attempts to find the whereabouts of the child from Daggett, but kills him when he refuses to help. When Danyael kills members of Gabriel's army of angels, Gabriel instead employs the assistance of a teenage girl (Izzy) who has just committed suicide. Gabriel keeps her alive to help him in his search for Valerie (despite his powers as an angel, he is completely naive about technology, and is unable to drive a car or work a computer and has her use her computer skills to find her and drive him around).

Gabriel's war against Danyael and the other angels climaxes in a battle in Eden, now an industrial wasteland. Danyael and Izzy are killed, but Valerie defeats Gabriel by seizing him and jumping from a building, confident that God will protect her as He told her He would (she reveals that Gabriel is unable to hear His voice as he simply does not listen); she is indeed unharmed, but Gabriel is impaled on a spike. As punishment, Gabriel is turned into a human by Michael. Valerie raises the child by herself, accepting the risk that the angels may come for her. The film ends with Gabriel as a derelict; a face in the sky and ominous clouds show that the war in heaven is not over.