Proto-Mayan is the hypothetical common ancestor of the 30 living Mayan languages, as well as the Classic Maya languages documented in the Maya Hieroglyphical inscriptions.

The Proto-Mayan language is reconstructed (Campbell and Kaufman 1985) as having the following sounds:

The following set of sound changes from proto-Mayan to the modern languages are used as the basis of the classification of the Mayan languages. Each sound change may be shared by a number of languages; a grey background indicates no change. 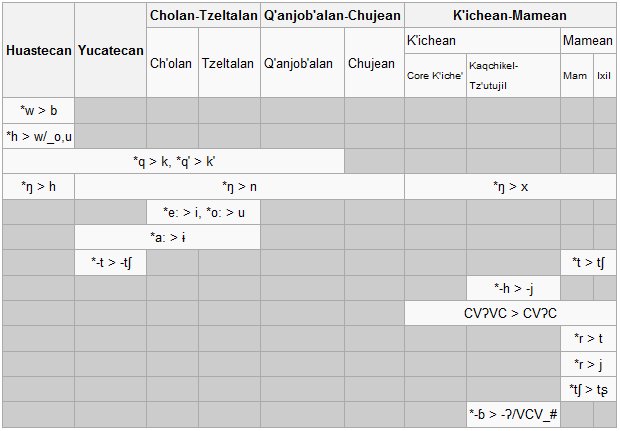 The changes of Proto-Mayan glottal fricative [h] are many and it has different reflexes according to position. In some positions it has added length to the preceding vowel in languages that preserve a length distinction. In other languages it has the reflexes [w], [j], [ʔ], [x] or a zero-reflex.[3]

Only K'ichean-Mamean and some Q'anjob'alan languages have retained proto-Mayan uvular stops [q] and [qʼ] whereas all other branches have changed these into [k] and [kʼ] respectively.

Huastecan is the only branch to have changed Proto-Mayan *[w] into [b]. Wastek also is the only Mayan language to have a phonemic labialized velar phoneme Template:IPA, but this is known to be a postcolonial development. Comparing colonial documents in Wastek to modern Wastek it can be seen that they were originally clusters of k and a rounded vowel followed by a glide. For example the word for "vulture" which in modern Wastek is pronounced Template:IPA was written <cuyx> in colonial Wastek and pronounced Template:IPA.

Several languages particularly Cholan and Yucatecan have changed short [a] into Template:IPA.