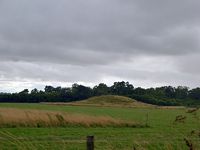 Normanton Down is a Neolithic and Bronze Age barrow cemetery located south of Stonehenge in the county of Wiltshire, England. It dates from between 2600 and 1600 BC and consists of a Neolithic long barrow and Bronze Age round barrows.[1]

The barrows of Normanton Down, panning across the southern horizon of Stonehenge, have been a part of the scenery of the Salisbury Plain since 2000 BC. In 1808, William Cunnington and Sir Richard Colt Hoare excavated the most famous and important barrow, the Bush Barrow. Cunnington also noted four sets of "curiously huddled together" human remains in the east end of the Long Barrow.[2] South of the long barrow lies a mortuary enclosure. The structure was discovered by aerial photography and later excavated. It was used for storing corpses before burial and carried distinct Neolithic characteristics.[2] Barrow excavation was a popular hobby in the 18th and 19th centuries among the local parsons objects. They became known as the "barrow-diggers."[3] In 2007, researchers from the University of Birmingham, funded by the Leverhulme Trust, began intensive studies of the artefacts found in all British Bronze Age burials, including those at Bush Barrow.

Development of the site

The Normanton Down site reveals the development of an entire Bronze Age cemetery. The 24 (actually over 50 January 2010) barrows appeared gradually throughout the Bronze Age.[4] Multiple graves all covered by a single barrow are characteristic of the area. April 2009 The early part of the Bronze Age was marked by Beaker burials, characteristic of the Beaker people. The Beaker graves contained various funerary goods and were usually covered by round barrows; however, most of these barrows did not survive, making the graves hard to locate. It is assumed that these Beaker burials are located mostly to the west, in areas marked by older long or oval barrows. Also, mounds were later erected over some of the preexisting Beaker graves, enabling early excavators to locate them.[4] Later, the layout of the cemetery changed dramatically. The Normanton "linear" cemetery emerged along the main ridge, with three foci marking the landscape in a relatively straight line. Even though it is very likely that each focus was previously a Beaker grave, there is a clear tendency towards building sizeable mounds. Grave clustering seems to be present to some extent, especially in one of the Beaker burials and in the Bush Barrow.[4] Although most of the barrows were constructed by the end of the Early Bronze Age, a significant change appears in the middle of the Bronze Age. Burials involving Deverel-Rimbury urns of middle Bronze Age manufacture are present in clusters of small mounds. In the same time period, the predominant site of burials shifted from Normanton Down to the west fields. This shift is suggested by settlement evidence and a remarkable feature known as a Wilsford shaft, used either as a well or a ritual shaft.[4] 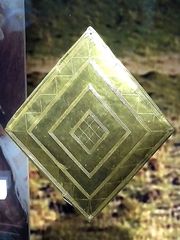 The most famous burial mound at Normanton Down is called Bush Barrow and is 40m wide and 3m high. The name "Bush Barrow" was given to this archaeological site in the 1720s by William Stukeley because of the trees planted on the top. It was previously known as "the green barrow" for the same reason. It was excavated in 1808 by William Cunnington and Sir Richard Colt-Hoare, who found multiple artefacts inside the mound.[4] Cunnington wrote a detailed account of the discovery of a body and artefacts surrounding it in the barrow. He described that the head of the grave was at the south and the body was positioned on the floor rather than in a pit, which was considered unusual. In the account, Cunnington described pieces of brass and wood that are now believed to be the remains of a rare type of dagger or knife. One of the most prominent artefacts found at Bush Barrow was a "lozenge" –shaped piece of gold. These items along with a spearhead and set of bronze rivets suggest that the individual buried at Bush Barrow may have been a wealthy, influential man, perhaps a chief. The finds have been called "Britain's first Crown Jewels" belonging to the "king of Stonehenge".[5] Modern reconstructions have led to the conclusion that the artefacts were arranged closely around the body.[4]

" On reaching the floor of the barrow, we discovered the skeleton of a stout and tall man lying from south to north: the extreme length of his thigh bone was 20 inches. About 18 inches south of the head we found several brass (i. e. bronze) rivets intermixed with wood and some thin bits of brass nearly decomposed. These articles covered a space of 12 inches or more; it is probable therefore that they were the mouldered remains of a shield. Near the right arm was a large dagger of brass and a spearhead of the same material, full 13 inches long, and the largest we have ever found. Immediately over the breast of the skeleton was a large plate of gold, in the form of a lozenge and measuring 7 inches by 6 inches. The even surface of this noble ornament is relieved by indented lines, checks and zigzags, forming the shape of the outline, and forming lozenge within lozenge, diminishing gradually towards the centre. We next discovered, on the right side of the skeleton, a very curious perforated stone, some wrought articles of bone, many small rings of the same material and another lozenge of gold. As this stone bears no marks of wear or attrition, I can hardly consider it to have been used as a domestic implement, and from the circumstances of it being composed of a mass of seaworms or little serpents, I think we may not be too fanciful in considering it an article of consequence." [6]

The finds from Bush Barrow are now displayed at the Wiltshire Museum in Devizes, which preserves the manuscript notes made by Cunnington and the drawings made by Philip Crocker.[7]

The type and quantity of grave goods found at Normanton Down suggest it was a burial place for people of high social status. Lavish burial configurations have also been identified. For example, the senior males found buried with daggers were originally placed in the grave lying on their left side. These males were most likely community leaders who toted daggers in their daily lives.[4] In addition, the location of Normanton Down as a whole suggests a special burial site. It was laid out with clear and commanding views of Stonehenge and other ridge tops in every direction (except the northwest), and it is crossed by the same solstitial axis that passes through Stonehenge.[8] Further study of Normanton Down has revealed an absence of flint-working on the site relative to its immediately surrounding areas. It seems the location was set apart from everyday activities and most likely carried special significance.[8] Compared to other similar cemeteries, the Normanton Down location contains an uncommonly high number of disc barrows in addition to several bell barrows and one saucer barrow.[6]