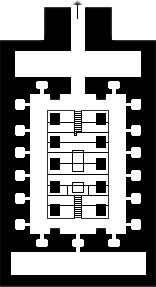 The Osirion or Osireon is located at Abydos at the rear of the temple of Seti I. It is an integral part of Seti I's funeral complex and is built to resemble an 18th Dynasty Valley of the Kings tomb. [1] It was discovered by archaeologists Flinders Petrie and Margaret Murray who were excavating the site in 1902-3. The Osirion was originally built at a considerably lower level than the foundations of the temple of Seti, who ruled from 1294 - 1279 BC [2]. Peter Brand says it "can be dated confidently to Seti's reign".[3]