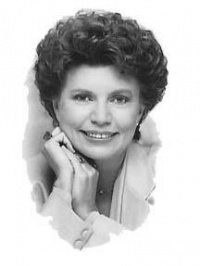 Elizabeth Clare Prophet (née: Wulf) (April 8, 1939 – October 15, 2009) was an American spiritual author and lecturer who was the leader of The Summit Lighthouse and Church Universal and Triumphant, a New Age religious movement which gained media attention in the late 1980s and early 1990s while preparing for potential nuclear disaster.[1][2] During this time, Prophet appeared on Larry King Live, Donahue and Nightline, among other television programs.[3] Earlier media appearances included a feature in 1977 in "The Man Who Would Not Die," an episode of NBC's In Search Of... series.[4] She was also featured in 1994 on NBC's Ancient Prophecies.[5]

Prophet was born Elizabeth Clare Wulf in Red Bank, New Jersey to Hans and Fridy Wulf. She spent her junior year studying French in Switzerland, and graduated from Red Bank Regional High School second in her class. She attended Antioch College in Ohio from September 1957 to March 1959,[6] transferring to Boston University in September 1959. She received a bachelor of arts degree in political science in approximately August 1961.[7] From the age of nine, Prophet suffered from absence seizures, a form of epilepsy, which worsened to include tonic-clonic seizure in 1988.Template:Citation needed

After visits to the Catholic Church, the Jewish synagogue and every Protestant church in Red Bank, she attended Methodist Sunday School before finally settling on Christian Science at age 9, attracted in part by its emphasis on healing and her desire to overcome her epilepsy. Template:Citation needed She eventually expressed ambition to become a Practitioner. 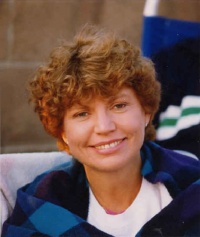 In 1960, while volunteering as a Sunday school teacher in the Christian Science Church in Boston, she met Dag Ytreberg, whom she briefly married.[8]

On April 22, 1961, her group invited Mark Prophet, who claimed to be a messenger for the Ascended masters, to speak in Boston. She attended this meeting at which Mark claimed to give a message, from the Archangel Michael; afterwards, she asked Mark to train her to be a "messenger". Mark and Elizabeth were married in 1963, had four children, and together administered The Summit Lighthouse, which Mark had founded in 1958.

On July 5, 1964, Prophet delivered her first public dictation, purportedly as a messenger for the ascended masters.

In 1965, the Prophet family relocated to Fairfax, Virginia, and in 1966 to Colorado Springs, Colorado.

In 1970, the Prophets went to India with several dozen church members. They toured the country, meeting with Indira Gandhi as well as the Dalai Lama.Template:Citation needed

In 1972, the first volume of Climb the Highest Mountain was published, a projected five-volume workTemplate:Citation needed, which the Prophets intended to become their central scripture.

On February 26, 1973, Mark Prophet died of a stroke. Elizabeth assumed leadership of their organization, which began an interest in survivalism, based on instructions she said Mark gave her the night before his stroke. She organized survival training on a Template:Convert property outside of Colorado Springs, which they had purchased with the intention of using for a headquarters. In May 1973, the organization entered into a partnership with a member who owned a property near Coeur d'Alene, Idaho, and attempted to establish a community there.Template:Citation needed

Prophet married Randall King, a staff member, on October 17, 1973. They were married for seven years. King later sued Prophet for $16 million, alleging involuntary servitude, among other causes of action. The suit was settled out of court for an undisclosed amount.Template:Citation needed

On May 1, 1975, Prophet established Church Universal and Triumphant as the religious arm of the organization.[2] She believed her church to be the rightful successor to the Catholic Church and used the title Vicar of Christ for the highest spiritual office in the church. (She was the first holder of that office; the church articles and bylaws define processes for future appointments to the office).

The church eventually became the umbrella organization for Prophet's work, with The Summit Lighthouse becoming the publishing arm of the church. 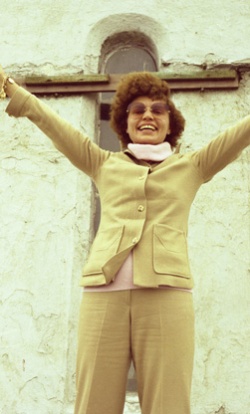 Elizabeth Clare Prophet in front of the chapel at the summit of Croagh Patrick, Ireland, 1980

In the summer of 1976, church headquarters were again relocated to the campus of Pasadena College, in Pasadena. Summit University, Montessori International, and quarterly church conferences were held there. About 300 staff members were then in residence.Template:Citation needed

In 1977, the church purchased a former Claretian seminary in Calabasas, a Template:Convert campus near Los Angeles, and moved its operations there in 1978. Due to opposition from various governmental agencies, including the California Coastal Commission, the church was never able to build its planned headquarters there. The church sold the property in 1986 to Soka University.

In October 1981, Prophet married Edward Francis, who was at that time a vice-president of the church. They were married for 16 years.

Also in 1981, the church purchased the Template:Convert Forbes Ranch, just outside of Yellowstone Park, near Gardiner, Montana.[9]

Final years in the ministry

In 1986, Prophet relocated her headquarters to the Forbes Ranch, which she had renamed the Royal Teton Ranch. It was here that she made her more well-known prophecies including the possibility of a nuclear war between the superpowers.Template:Citation needed

Beginning in 1986, as she was leaving Los Angeles, Prophet began predicting a possible first-strike nuclear attack by the Soviet Union and urged followers to prepare for this possibility by building fallout shelters and storing food and other necessities for survival.[2]

She was diagnosed with Alzheimer's disease in November 1998. The leadership of her church subsequently passed to a board of directors.Template:Citation needed

In 1999, deteriorating health led Prophet to retire from the church. In 2000, she entered full-time nursing care for Alzheimer's disease in Bozeman, Montana. She died October 15, 2009 at the age of 70.[9][10][11] In September 2011, Prophet and several other prognosticators who incorrectly predicted various dates for the end of world were jointly awarded an Ig Nobel Prize for "teaching the world to be careful when making mathematical assumptions and calculations".[12][13]

Both Mark and Elizabeth taught the Path of Personal Christhood, the way of the soul's one-on-one relationship with the god within. Through the practice of the path of "karma yoga" (the path of balancing each and every one of the untoward acts, which one has committed in this and previous lifetimes), and the use of the Science of the Spoken Word, a form of mantra combined with meditation, prayer and visualization, individual souls seek reunion with God, desiring to "Ascend into Oneness with that God", even as Jesus did at the end of his lifetime.[14] They taught that this divine gift (The Ascension) could be earned after many lifetimes, upon balancing 51% or more of the negative karma of the soul.".[15] The key to a more rapid balancing of Karma is the invocation of the Violet Flame, a spiritual light that is closest in its frequency or vibration to the physical octave. The teachings state that the Violet Flame, invoked by specific mantras called "decrees," actually transmutes negative karma, changing it into positive spiritual treasures, which accrue to an individual's heavenly "bank account." The doctrine brought forth by Mark L. Prophet and Elizabeth Clare Prophet combines both Eastern and Western religious teachings, and came from divine messages transmitted by the "Ascended Masters", heavenly beings ranging from universally familiar beings such as Gautama Buddha and Jesus Christ, to lesser known beings such as Ascended Master K-17, the head of the "Cosmic Secret Service".[2][16]

Innovations in the Ascended Master Teachings

Template:Disputed-section Elizabeth Clare Prophet significantly expanded the use of the concept of "Twin Flames" which had been introduced in previous New Age teachings. A Twin Flame is supposedly the other half of a pair of souls which is always created at the beginning of the incarnation of a human being in the physical realm. The concept of had been included in the teachings of Guy and Edna Ballard's I AM Activity, but the idea of attempting to find one's twin flame had been dismissed by them as a distraction to one's main goal of accomplishing the ascension. Elizabeth Prophet popularized the notion and encouraged it, including it as a major them of one of her quarterly teaching sessions, entitled "Twin Flames in Love."

In another break from previous New Age teachings, Elizabeth Prophet promoted the concept of "Fallen Angels" as beings similar to those taught of in evangelical Christian teachings. Previously, in the I AM Activity and Theosophy, it had been stated that angels cannot fall.

Both Elizabeth and Mark Prophet took more than 3,000 "dictations" from more than 200 different "Ascended Masters". The messages, which often quoted the Bible or other scriptures, were published as "Pearls of Wisdom," which were mailed to weekly subscribers and later compiled into annual hardcover volumes.[17] Mrs. Prophet described her taking of dictations as a raising of her consciousness to the level of her Higher Self, or Holy Christ Self, whereupon the Ascended Master who wished to communicate would then lower his or her Consciousness from the level of the God-Consciousness, to that level of the Christ Self of Mrs. Prophet. She stated that she was fully conscious and not in a trance when she took dictation.

Ms. Prophet said that she was previously incarnated as Nefertiti, Queen Guinevere of Camelot, St. Theresa of Avila, St. Catherine of Sienna, and Marie Antoinette.[18]

The Prophets believed in extraterrestrial life. However, Prophet did not see alien visitors as a benign presence (as did many New Agers) but generally having malevolent intent.[19]

Some of Prophet's ideas are published in her book Fallen Angels and the Origins of Evil and in Paths of Light and Darkness, the sixth book in her Climb the Highest Mountain series. 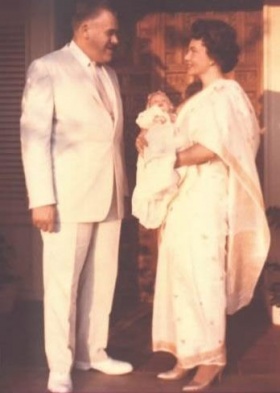 Mark and Elizabeth Prophet with Tatiana

Prophet was survived by her five children and former husband Ed Francis. Her four adult children: Sean Prophet, Erin Prophet, Moira Prophet, and Tatiana Prophet had all worked for the group at one time or another, but left the Church in the 1990s. Erin Prophet is a project manager at a Boston hospital, and was her mother's co-guardian for many years. She also ran a website that raised funds for her mother's medical care. Sean Prophet is a creative director in Los Angeles, and also runs a prominent atheist website, Black Sun Journal. He has publicly repudiated the teachings of the Ascended Masters and recounted his mother's admission to him of her abuses of power. He has also expressed regret for his role in promoting the organization as minister and vice-president, and his desire to right past wrongs by exposing what he now views as transparent fraud throughout organized religion and the New Age movement.[20] Moira Prophet was the first of Prophet's children to become publicly antagonistic, speaking out against the church on The Oprah Winfrey Show in 1989.

Tatiana Prophet was a reporter for the Victorville Daily Press.

Prophet's grandson Chris Prophet is the former drummer for the post-hardcore group Horse The Band.

By Alex and Margaret Reichardt