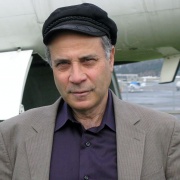 Robert Zubrin (born April 19, 1952) is an American aerospace engineer and author, best known for his advocacy of the manned exploration of Mars. He was the driving force behind Mars Direct—a proposal intended to produce significant reductions in the cost and complexity of such a mission. The key idea was to use the Martian atmosphere to produce oxygen, water, and rocket propellant for the surface stay and return journey. A modified version of the plan was subsequently adopted by NASA as their "design reference mission". He questions the delay and cost-to-benefit ratio of first establishing a base or outpost on an asteroid or another Apollo Program-like return to the Moon, as neither would be able to provide all of its own oxygen, water, or energy; these resources are producible on Mars, and he expects people would be there thereafter.[1]

Disappointed with the lack of interest from government in Mars exploration and after the success of his book The Case for Mars as well as leadership experience at the National Space Society, Zubrin established the Mars Society in 1998. This is an international organization advocating a manned Mars mission as a goal, by private funding if possible.

Zubrin lives in Lakewood, Colorado; he has two daughters, Rachel and Sarah.

Zubrin holds a B.A. in Mathematics from the University of Rochester (1974), and a masters degree in Aeronautics and Astronautics, a masters degree in Nuclear Engineering, and a Ph.D. in Nuclear Engineering — all from the University of Washington.[2] He has developed a number of concepts for space propulsion and exploration, and is the author of over 200 technical and non-technical papers and five books. He was a member of Lockheed Martin's scenario development team charged with developing strategies for space exploration. He was also "a senior engineer with the Martin Marietta Astronautics company, working as one of its leaders in development of advanced concepts for interplanetary missions" (The Case for Mars 1996). He is also President of both the Mars Society and Pioneer Astronautics, a private company that does research and development on innovative aerospace technologies. Zubrin is the co-inventor on a U.S. design patent and a U.S. utility patent on a hybrid rocket/airplane, and on a U.S. utility patent on an oxygen supply system (see links below). He was awarded his first patent at age 20 in 1972 for Three Player Chess. His inventions also include the nuclear salt-water rocket.

Zubrin has also edited or co-edited the following books, most of which include contributions he wrote:

The ethics of terraforming

An aging Robert Zubrin also appears as a background character in The Martian Race (1999) by Gregory Benford, a science fiction novel depicting early human explorers on Mars in the very near future. Benford, who is also an astrophysicist, is a longtime member of both the board of directors and the steering committee of the Mars Society.

The songwriter and musician Frank Black (alias Black Francis of the Pixies) penned an homage to Zubrin, "Robert Onion", on the album Dog in the Sand. The lyrics form an acrostic spelling "Robert The Case For Mars Zubrin".[6]

In 2010 Robert Zubrin was featured in the Symphony of Science video "The Case for Mars" along with Carl Sagan, Brian Cox, and Penelope Boston.

The fictional character Dr. Zachary Walzer in the 2010 independent VODO series Pioneer One is loosely based on Zubrin.