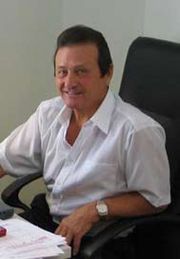 Why has Gennady I. Shipov so exasperated the strict, mistrustful scientific world? Even the subject of his research, "mysterious torsion fields", is like a nail in the shoe of physicists, very inconvenient! But, scientists today are recognizing that "spinning fields" really do exist. Just as electromagnetic fields are caused by a charge and gravitational fields are caused by weight, torsion fields are created by any rotating objects.

This idea was first introduced by the French mathematician R. Cartan in 1913, then by Albert Einstein. Within the framework of Cartan-Einstein theory, the existence of these fields has been permitted. But, they are weak, cannot be observed, and seem to have no practical application. Shipov states the opposite. This is connected to his theory of physical vacuum and the "mysterious ether" Newton wrote about. For the last 30-40 years, scientists have been trying to analyze the properties of physical vacuum, although from an electromagnetic or gravitational approach.

Similar Heim theory is a collection of ideas about the fundamental laws of physics proposed by Burkhard Heim and further developed by Walter Dröscher and Jochem Häuser. Most of their original work and the subsequent theories based on it have not been peer reviewed. Heim attempted to resolve incompatibilities between quantum theory and general relativity. To meet that goal, he developed a mathematical approach based on quantizing spacetime itself, and proposed the "metron" as a (two-dimensional) quantum of (multidimensional) space. Part of the theory is formulated in terms of difference operators; Heim called the mathematical formalism "Selector calculus".

The mathematics behind Heim's theory requires extending spacetime with extra dimensions; various formulations by Heim and his successors involve six, eight, or twelve dimensions. Within the quantum spacetime of Heim theory, elementary particles are represented as "hermetry forms" or multidimensional structures of space. Heim has claimed that his theory yields particle masses directly from fundamental physical constants and that the resulting masses are in agreement with experiment. However, this claim is disputed. For Heim, this composite nature was an expression of internal, six-dimensional structure. After his death, others have continued with his multi-dimensional "quantum hyperspace" framework. Most notable are the theoretical generalizations put forth by Walter Dröscher, who worked in collaboration with Heim at some length. Their combined theories are also known as "Heim-Droescher" theories.

According to the story, Burkhard Heim was a reclusive, disabled German scientist who worked entirely outside the usual framework of physics, and between 1952 and 1959 developed a new theory of elementary particles and gravity. Unfortunately, his main publication was a self-published book, available only in German, plus a few articles (also in German) written in a journal about aerodynamics. As a result of the inaccessibility of his papers in English, his use of nonstandard mathematical notation that he invented himself, and the fact that he was very secretive about details of his work, his work was almost unknown in the community of physics. This changed in 2002, shortly after Heim's death, when Walter Dröscher, and Jochem Häuser began to publish papers based on Heim's work, claiming that his alternate theory of gravity allowed for the possibility of antigravity and faster than light propulsion.

Torsion field, also called axion field, spin field, spinor field, and microlepton field is a scientific concept loosely based on Einstein-Cartan theory and some unorthodox solutions of Maxwell's equations. The torsion field concept was conceived in the Soviet Union by a group of great physicists in the 1980s. The group, led by Anatoly Akimov and Gennady Shipov, began the research as the state-sponsored Center for Nontraditional Technologies.

Everything is made of vacuum. Its energy gives birth to, penetrates, and feeds the whole world of existence. Clever scientists know this, but only smile skeptically. New representations of the nature of physical vacuum do not fit the picture of the world created by classical science. But, the idea of the Great Emptiness, the Dao, was known in China 5000 years ago. Today, this idea is promising a cataclysm in natural science, technology, and all spheres of life. Along comes Shipov with his formulas. His equations of physical vacuum explain and unite all types of interactions present in nature. These formulas should help provide unexpectedly new and unusual answers in a number of areas- transport, communications, medicine, etc. The solutions are so improbable that they are difficult to believe.

Unlike the mechanism attributed to quantum spin effects, the torsion fields involve the use of long-range (Pauli) classical spinners to describe such interactions. Here, focus is not on the Dirac equation to describe fermion spin, but on a classical analogue, the Bargmann-Michel-Telegedi (BMT) equation to account for spin effects. BMT follows from a quasi-classical extension of the Dirac equation with an added Pauli term, and has been responsible for accounting for the anomalous magnetic moment of the electron, and confirms the effect of radiative self-polarisation, both without the necessity for the standard application of quantum electrodynamics.

Torsion fields also have the important characteristic of being affected by the specific topology/geometry of macroscopic objects and biological fields, a feature which has been corroborated by the work of Glen Rein on DNA irradiated by non-Hertzian energy emanating from various geometric patterns. Torsion fields have been found, by Dr. Buryl Payne, to emanate from living organisms, included humans, cats, dogs, horses, plants, and fruits. They can be detected by a simple device he invented, called the "Biofield Meter", which can be constructed by anyone in an hour from household materials.

The Wright brothers, Goddard, Edison, Pons & Fleischmann and many others had two things in common: First, they were leaders in their fields (they had few, if any, peers) and second, they had detractors. Not only detractors, but highly-educated, professional detractors. These critics were experts anxious to demonstrate their superior knowledge that heavier-than-air craft were impractical, that rocket ships could not fly in a vacuum ("nothing to push against"); light bulbs were not practical; and low-energy nuclear reactions were not possible. Now come Torsion Fields and the skeptics and the detractors will have a field day!

Physicists are well aware of the existence of energy fields with properties which are not explained by the classical equations of Maxwell or Schr"dinger. Experimental anomalies associated with so-called free energy research may also involve non-classical energy fields, referred to here as quantum fields. Recent findings in biology indicate that certain bio-molecules act as superconductors and biological systems in general exhibit non-local, global properties, which are consistent with their ability to function at the quantum level. The possibilities that such anomalous behavior might be accounted for by the presence of endogenous quantum fields in biological systems have received little attention.

Torsion fields have been studied by several groups of Russian scientists for at least three decades and most of that time in secret. What are torsion fields? According to A. Akimov, these fields come in at least three types: E-fields, S-fields, and G-fields. The E, S, and G stand for Electric, Spin, and Gravity fields. The torsion field and its emanations are subtle energy fields. They are separate and distinct from classical Electric, Magnetic, and Gravity fields. Generators for these fields can be shielded against electro-magnetic fields and the torsion field still manifest itself through such shielding.

Torsion fields can be generated, detected, switched on and off (such as for communication purposes), and are a distinct type of energy field heretofore not included in today's classical physics. Torsion field emanations can travel at velocities at least as high as 109 times the speed of light. Torsion fields can interact with laser beams (change frequency); affect biological processes; are generated by melting or solidifying some materials; affect quartz crystals; affect some electronic components; can favorably change some beverages; and have been noted to affect gravity.

According to Akimov, torsion fields coupled with the standard electric, magnetic, and gravity fields should provide means for a unified field theory that will extend the realm of science to include the effects of consciousness. The concept of dowsing, for example, can now have a scientific basis for explanation of the phenomenon. If this suggestion by Akimov proves viable, then science has an opportunity to extend its borders more rapidly into the so-called psychic realms. That could be a multi-decade venture of considerable importance to the expansion of scientific knowledge.

A couple of issues ago, NEN began advertising "gravity-wave tapes" and a multi-channel "gravity-wave detector". You may question our motive. After reading some of the Russian literature about torsion fields, your editor became almost convinced that there was a similarity between the so-called gravity waves of Ramsay and Hodowanec and the torsion fields. If correct, then the Ramsay gravity-wave detector will be an excellent torsion-field measuring instrument. Therefore, we have obtained copies of professional papers from three groups of scientists working on torsion fields in Russia. All three of these torsion-field articles are published in volume2, no. 3-4 of the Journal of New Energy.

In Russia, several types of torsion-field generators have been patented and some are available to purchase. NEN will try to obtain more information about the availability of torsion-field generators. Hopefully, such generators can be made available for purchase (or replication) here in the U.S. NEN encourages its readers to consider becoming involved in the development of low-power FTL communciation systems. You may want to get a fast start by ordering a gravity wave detector. Maybe the next Mars Rover will be controlled by a torsion-field communicator and not suffer the considerable delay now endured in controlling the rover over millions of miles using the slow, old-fashioned, radio waves.

Until now, little attention has been paid to the four forces of inertia: centrifugal, translational, rotational, and coriolis. Shipov's results indicate that vehicles propelled by inertial force can operate in any medium with 70-90% energy efficiency and are ecologically friendly. The research focused on "twisted" space-time, or torsion in space, as the propulsion source. Shipov's prototype (a small vehicle without gears, propellers, or any emissions) moves along the ground, on water, and when suspended in air. With this motion, unlike conventional jet-propelled motion, inertial mass is not expended, degraded, or emitted; it remains controlled by the local metric engineering of warp. The experimental unit weighs 1.7 kg and has a traction force of 170 grams. Controlled by the computer software through an attached cable (in the future, it will be just a microchip),the test vehicle moves at a speed of 2 meters per 10 seconds (1.4k/h) and can accelerate. Calculations indicate that a vehicle weighing around 1.5 tons could travel 1000 meters (1 km) in 4 seconds or 900 k/h.