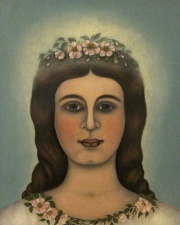 Hélène Smith (real name Catherine-Elise Muller, December 9 1861, Martigny ― June 10 1929 Geneva) was a famous late-19th century French psychic. She was known as "the Muse of Automatic Writing" by the Surrealists, who viewed Smith as evidence of the power of the surreal, and a symbol of surrealist knowledge.[1][2] Late in life, Smith claimed to communicate with Martians, and to be a reincarnation of a Hindu princess and Marie Antoinette.

Daughter of a Hungarian merchant, Smith worked as an employee in a commercial house. She discovered spiritualism in 1891 and joined a spiritualist "development" circle. According to her fellow believers, she began to show evidence of mediumistic abilities in 1892, and claimed to communicate with Victor Hugo and Cagliostro. She became well known in Geneva, and it was there that Flournoy made her acquaintance. Her channeling evolved from the usual raps and table-tipping to somnambulatory trances, of which she remembered nothing. While in this state she experienced clear images of faraway places such as a civilization on Mars, and of her own former lives. She would write out the Martian communications on paper and translate them into French, popularizing automatic writing.

In 1900, Élise Müller became famous with the publication of Des Indes à la Planete Mars ("From India to the Planet Mars") by Théodore Flournoy, Professor of Psychology at the University of Geneva. The medium and the psychologist remained very close until 1899, when "Des Indes à la planète Mars" was first published. The book documented her various series of experiences in terms of romantic cycles: the "Martian" cycle, "Ultramartian" cycle, "Hindu", "Oriental", and "royal" cycles. The book was very well received, but Müller felt that she had been misunderstood and she would no longer work with Flournoy, who had portrayed her various "cycles" as the products of what he judged to be infantile imaginings.[3] and her Martian language as a mere constructed language.[4] 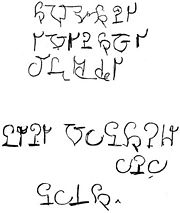 Automatic writing in "Martian" produced by Smith at a séance

In 1900, a certain Mrs. Jackson, a rich American spiritualist who was impressed by Müller, offered her a salary which would permit her to quit her job and dedicate herself to pursuing and documenting her experiences. Müller accepted and was able to continue with further cycles. She also began to paint her visions and particular religious images of Christ.