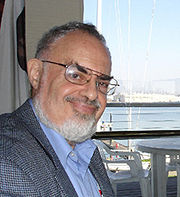 Stanton Terry Friedman (born July 29, 1934) is a professional Ufologist, currently residing in Fredericton, New Brunswick, Canada. He is the original civilian investigator of the Roswell incident. He studied physics at the University of Chicago and worked as a nuclear physicist on Research and Development projects for several large companies. He is a dual citizen of the U.S. and Canada.

Qualifications and career in Nuclear Physics

Friedman graduated from Linden High SchoolTemplate:Dn and the University of Chicago, earning a Bachelor of Science (1955) and Master of Science (1956) degree in nuclear physics.[1]

Friedman was employed for 14 years as a nuclear physicist for such companies as General Electric, General Motors, Westinghouse, TRW Systems, Aerojet General Nucleonics, and McDonnell Douglas where he worked on advanced, classified programs on nuclear aircraft, fission and fusion rockets, and compact nuclear power plants for space applications [2]. Since the 1980s, he has done related consultant work in the Radon-detection industry. Friedman's professional affiliations have included the American Nuclear Society, the American Physical Society, the American Institute of Aeronautics and Astronautics and AFTRA.[1] [2]

In 1970 Friedman departed full-time employment as a physicist to pursue the scientific investigation of UFOs. Since then, he has lectured at more than 600 colleges and 100 professional groups in 50 states, nine provinces, and 16 foreign countries.[2] Additionally, he has worked as a consultant on the topic. He has published more than 80 UFO related papers and has appeared on many radio and television programs [2]. He has also provided written testimony to Congressional hearings and appeared twice at the United Nations.[2] [3]

Friedman used to refer to himself as "The Flying Saucer Physicist" due to his degrees in nuclear physics and work on nuclear projects.[4] Friedman has consistently favoured use of the term flying saucer in his work, saying "Flying saucers are, by definition, unidentified flying objects, but very few unidentified flying objects are flying saucers. I am interested in the latter, not the former."[2]

Stanton Friedman is the original civilian investigator of the Roswell UFO incident and supports the hypothesis that it was a genuine crash of an extraterrestrial spacecraft.[3] After researching and fact checking the Majestic 12 documents, Friedman believes that there is no substantive grounds for dismissing their authenticity.[4]

On George Noory's "Coast to Coast" radio show, Friedman debated the SETI Institute's Senior Astronomer, Seth Shostak. Like Friedman, Shostak also believes in the existence of intelligent life other than humans; however, unlike Friedman, he doesn't believe such life is currently on Earth or is related to UFO sightings.[5]

In 1968 Friedman argued to a Committee of The House Of Representatives that the evidence suggests that Earth is being visited by intelligently controlled extraterrestrial vehicles.[6] Friedman also stated he believed that UFO sightings were consistent with magnetohydrodynamic propulsion - a technology, referred to in the French COMETA report, that may be feasible in the near future. The COMETA report claims about magnetohydrodynamic propulsion are based on the scientific works of Jean-Pierre Petit.[7] It is also currently being investigated by aeronautical engineer Leik MyraboTemplate:Citation needed. MHD propulsion can only explain the shock wave annihilation and the halo that is often seen in ufo sightings. It can not explain intergalactic travels which the standard cosmologic model can just not imagine.

Friedman has further hypothesized that UFOs may originate from relatively nearby sun-like stars. He has stated that there

... are about 1,000 stars within our local galactic neighborhood, meaning the region within 54 light years of Earth ... According to an excellent study done by Terence Dickinson ... 46 of those stars are very similar to our sun .... the star pair Zeta 1 and Zeta 2 Reticuli, in the southern sky constellation Reticulum (the Net) only 39 light years away from us, are sun-like stars about 35 times closer to each other than the sun is to our nearest stellar neighbor. They are also about 1 billion years older than the sun. A civilization that had a billion-year head start on us will certainly know things that we can't even dream of. Our own limited science has shown that nuclear fusion rockets can provide thrust far in excess of that provided by chemical rocket, and so interestellar travel may be as easy for other civilizations now as nonstop flight across the ocean is for us today".[2] (p.217)

A piece of evidence that he often cites with respect to this hypothesis is the 1964 star-map drawn by alleged alien abductee Betty Hill during a hypnosis session, which she said was shown to her during her abduction. Astronomer Marjorie Fish constructed a 3-dimensional map of nearby sun-like stars and claimed a good match from the perspective of Zeta Reticuli, about 39 light years distant. The fit of the Hill/Fish star maps was hotly debated in the December 1974 edition of Astronomy Magazine [8][9], with Friedman and others defending the statistical validity of the match.

Friedman states that he has reached major conclusions on the basis of his research dating back to the late 1950s. These can be summarised as follows:[2]

In addition, Friedman maintains that, although arguments against these conclusions sound plausible, "when one examines them, they collapse, because of an absence of evidence to support them, and the presence of evidence that contradicts them" [2] (p. 30). Friedman argues that, reproducibility is largely irrelevant to the study of UFOs, essentially because by definition, scientists do not control variables if UFO phenomena involve intelligent extraterrestrial control; i.e. in this case, the study of UFOs does not involve experiment and experimental methods. This position can be criticized on the basis that experiments can be conducted on materials or technology that are hypothesized to have an extraterrestrial origin. Although Friedman maintains that such materials have on at least one occasion been obtained, as stated above, he maintains these are highly classified and not available for conventional or mainstream scientific study.

Friedman has characterized the kinds of evidence, scientific and otherwise, that he considers to be relevant, which include evidence such as credible testimony, analyses of documents, video and physical trace evidence; and particularly multiple sources of mutually corroborating evidence of one or more kind. Regarding testimony, he states that "we must remember that the reason most sightings can be determined to be relatively conventional phenomena, often seen under unusual circumstances, is that most people are relatively good observers. The problem comes with the interpretation of what was observed ... it would be irrational to say that people are good observers when their input allows us to identify the object being observed, and yet poor observers if we can't identify the UFO as something conventional" [2](pp. 32–33). In response to criticism on the basis of psychological or other grounds, he refers to the quality evaluation reported in the Project Blue Book Special Report No. 14 and other evidence, such as that contained in the COMETA report.

Friedman has stated strong views against SETI research, largely on the basis of rejection of the basic assumptions underpinning the research. Perhaps most fundamentally, Friedman contests the implicit premise that there has been no extratterestrial visitation of the planet. He has argued that SETI is seeking only signals; not extraterrestrial intelligence or beings. He maintains that the prominence and widespread public claims of those involved with SETI, including ridicule, has tended to prevent serious research, including by journalists [2](p. 129)

For the same reason, Friedman criticized Carl Sagan, a proponent of SETI, for ignoring empirical evidence, such as "600-plus UNKNOWNS of Project Blue Book Special Report No. 14". Friedman argued that this empirical data directly contradicts Sagan's claim in Other Worlds, that the "reliable cases are uninteresting and the interesting cases are unreliable". Specifically, Friedman refers to a table in Project Blue Book Special Report No. 14 that he says "shows that the better the quality of the sighting, the more likely it was to be an 'unknown', and the less likely it was to be listed as 'insufficient information'" [2](p. 42).

Friedman says of the response to his talks, "I know that most people are unfamiliar with the several large-scale scientific studies ... because I ask, after I show a slide and ask about each one, "how many here have read this?" Typically it is only 1 or 2 percent." He says that a talk he gave to Canadian journalists in Saint John, New Brunswick caused the attitudes of the journalists to change because "Attendees had had no idea there was so much solid information, as opposed to the tabloid nonsense they thought was the primary source of UFO data." [2] (p. 202)

Friedman has summarized the results of polls in making the argument that the majority of people believe UFOs exist and the indication is the same holds for at least some groups of scientists. Specifically, Friedman (2008) refers to the following data in support of his position [4].

Friedman is outspoken in his articulation of positions and in his criticism of UFO debunkers, often stating he is not an "apologist ufologist". His positions are regarded as controversial in mainstream science and media, but Friedman claims to have received little opposition at his many lectures, most of which have been at colleges and universities, many to engineering societies and other groups of physicists.[2](p. 24) He has had a number of debates in the mainstream media, including one with UFO skeptic Michael Shermer on CNN.

Friedman has been criticized both by skeptics and other Roswell researchers for taking the position that there are no substantive grounds for dismissing the authenticity of some Majestic 12 documents. Friedman himself was the first to provide evidence that some of the documents are clearly hoaxes. For example, he showed that a supposed memo from Admiral Hillenkoetter to President Truman, dated February 17, 1948, was actually the emulation of a letter from Marshall to Roosevelt that featured in the book The American MAGIC. Friedman has researched the MJ-12 documents since first becoming aware of them from Wiliam Moore and Jaime Shandera in 1984.[2][10] He addressed criticisms of the original documents in both sources. As an example, Philip J. Klass claimed lexicographic inconsistencies based on the use of Pica typeface in the Cutler-Twining memo and offered $100, in a challenge to Friedman, for each legitimate example of the use of the same style and size Pica type as used in the memo. Friedman provided 14 examples and was paid $1000 by Klass.[2](reproduced on p. 262)