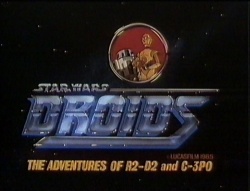 Over the course of the series, the droids team up with four different sets of masters. The series is divided up into three cycles: at the beginning of each, the droids usually run into their new masters in an accidental way, and at the end of each cycle, they usually are forced to leave their masters for one reason or another. The Great Heep, a television special following the series, served as a prequel to the third Mungo Baobab cycle.

The series' opening theme, "Trouble Again," was performed by Stewart Copeland of the Police and written by Copeland and Derek Holt.

The famous droid duo faced off against gangsters, criminals, pirates, Boba Fett, IG-88, the Galactic Empire and other threats throughout the series. During their adventures, the droids always found themselves with new masters and new difficult situations as a result.

The series featured Anthony Daniels as the voice of C-3PO, who also portrayed the character in the films, along with the voice talents of Graeme Campbell, Rob Cowan, Don Francks, Peter MacNeill, John Stocker and Winston Rekert. Several episodes feature guest stars like Dan Hennessey, Chris Wiggins, George Buza, Andrew Sabiston, Eric Peterson, Rob Cowan, Jamie Dick, Cree Summer, Donny Burns, Don McManus, Long John Baldry and Gordon Masten. Several episodes of the series were written by Ben Burtt. The series was produced by Nelvana on behalf of Lucasfilm and broadcast on ABC. The cartoon series lasted one season and was made up of thirteen regular episodes in 1985. There was also a two-part television special entitled, "The Great Heep" in 1986. Following the original run of the complete series, the entire show was rebroadcast as part of The Ewoks and Droids Adventure Hour the same year, along with its series counterpart, Star Wars: Ewoks. The shows, Droids and Ewoks, were also played on the Sci Fi Channel back in 1993 as a part of their early morning Sci-Fi cartoon run, although somewhat edited for time.

In 1986, Marvel Comics' Star Comics imprint published a comic book based on the cartoon series under the name Star Wars: Droids. The bi-monthly series ran for eight issues. Significant issues include No. 4, which crossed over with the Ewoks comics series, and Nos. 6–8, whose story was titled "Star Wars: According to the Droids", retelling the original film complete with new scenes told from the perspective of the droids. It is of note that the series was drawn by comic legend John Romita, Sr.

In 1994, Dark Horse Comics published a new series of Star Wars: Droids, continuing the story started in Dark Horse Comics Nos. 17–19. Set before the events of Star Wars Episode IV: A New Hope, the mini-series ran for six issues. A Special No. 1 was released in January 1995, followed by a second mini-series that ran for eight issues. A one-shot titled Star Wars: Droids – The Protocol Offensive was published in September 1997.

In 1985, Kenner produced a toy line based on the series, including action figures, ship models, and other items. For more on the toy line, see The Star Wars Collector's Archive.

A Star Wars: Droids (computer game) was released in 1988 for the ZX Spectrum and Amstrad CPC home computers.