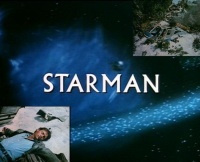 Starman is an American science fiction television series, starring Robert Hays and Christopher Daniel Barnes. The series ran on the ABC network from September 19, 1986 to May 2, 1987. The was an adaptation and sequel to a movie of the same name produced in 1984.

Despite the fact that the series takes place in 1986/1987, events from the 1984 film are referred to as occurring "15 years ago." This creates a continuity problem because the Voyager Golden Record (the discovery of which by Starman led him to Earth for the events of the film) did not launch until 1977.

The series takes place fifteen years after the film's story and features the return of the alien in the body of a deceased photojournalist named Paul Forrester to spend time with his now teenage son Scott Hayden (Christopher Daniel Barnes) as they try to avoid a U.S. government agent and find the missing Jenny Hayden.

Each episode of the series had the fugitive father and son moving from place to place (in a format similar to The Fugitive and The Incredible Hulk) meeting people that were in need of some assistance, while Scott tries to explain to his alien father what it means to be a human being. Each has a small silvery sphere of alien material, about 3-4 cm in diameter, that allows a trained mind to project thoughts to carry out telekinesis in some limited manner. Forrester is fairly adept, but Scott needs to learn how to focus. In one episode, "Blue Lights", Scott creates a picturesque image of a rotating ring of blue lights.

Forrester and Scott are also trying to stay one step ahead of government UFO investigator Fox (Michael Cavanaugh), who will not tolerate Forrester and Scott running free in society. Once, when Forrester tells Fox that children are the world's future, Fox reacts with hostility to imply that Scott is some sort of mutant, and therefore not acceptable. Forrester, however, holds no malice toward Fox, and even treats a life-threatening injury before he and Scott make their escape. (This, again, has similarities to The Fugitive, with Dr. Kimble occasionally having the opportunity to preserve the life of his own nemesis, Lt. Gerard.)

In a two part episode "Starscape", Paul and Scott find Jenny Hayden (Erin Gray) living as an artist, under the name Karen Iseley, in Arizona. One more episode, "The Test", aired after the two part episode, that tried to pave the way for a second season, but the series was cancelled.

Robert Hays and Christopher Daniel Barnes would go on to perform the voices of two noteworthy Marvel Comic Book superheroes. Hays portrayed Iron Man while Barnes portrayed Spider-Man. Also, while Robert Hays portrayed Jeff Bridges' character on the TV adaptation of Starman and Iron Man in animation, Bridges would go on to play the villainous Obadiah Stane in the live-action Iron Man film from 2008. A guest star was Jane Wyatt.