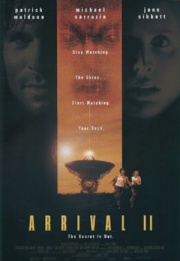 The Second Arrival is a 1998 American science fiction movie. It is the sequel to the 1996 movie The Arrival.

This film takes place two years after the first film. Zane Ziminski (the protagonist from The Arrival) is found dead in a remote Eskimo community. It is believed that he died of a heart attack. His broadcast to the world about the aliens is believed to have been a UFO hoax due to his dismissal from NASA (this despite Earth continuing to have record temperatures). As his death is announced on TV, five people receive envelopes with details of an alien invasion. This group of five consists of three scientists, Zane's step brother Jack Addison, a computer expert whom he has not seen in seven years, and a reporter named Bridget Riordan. They receive papers talking of global warming and of aliens terraforming Earth into a planet hot like their own dying world.

The group gets together in a large freezer (as the aliens can't stand cold) to see what Zane has left them. They find some alien artifacts in an envelope left to the group. One of the five suffers from the cold and is revealed as an alien. He sets off a metal sphere (a "black hole bomb" or BHB as it rises into the air, revolves then sucks everything in a large area into it, causing it to vanish permanently). The alien and one of the men are sucked into the BHB's area of influence as well as the contents of the room but Addison, Riordan and Zarcoff manage to escape.

Zarcoff in his hotel room is killed by an alien metal spider machine which injects him, making it look like his death was from a heart attack. Addison goes back to his rooms to find a BHB has cleared them of everything. A girl he picked up and slept with last night turns out to be an alien and she and another alien inject Addison and he later wakes up to find himself being "taken for a ride".

Addison rolls out of the car and despite terrible disorientation manages to elude them and team up with Riordan again. The aliens have set the FBI on the two as well as cancelling their credit cards and emptying Addison's bank account of $15,000. The pair have only one artifact left and that produces a perfect 3D hologram when a laser beam is shone through it. They use it to find out that an atomic power plant due to be opened near where they are in Quebec is in the hands of the aliens. Later it is revealed that it is to go critical and will spread deadly radiation over many hundreds of miles (the aliens are immune to radiation).

Addison uses his computer skills to walk around and interact with an alien ship in space and to program a giant BHB to go off in one hour. The aliens arrive and both are captured from the hologram. In the atomic power station, their time seems to be up till the giant BHB goes off in the alien area below it and starts ripping apart and swallowing the atomic power station. Nearly dragged into its sphere of influence, Addison uses a small BHB to stop the giant one long enough for the two to escape. They just make it as all that is left of the power station is a huge hole in the ground.

Some time later, Riordan's book Alien Agenda (which details their recent adventures as well as the alien's plans for the world) is still top of the Science Fiction and NY Times best seller lists after 2 months. The world seems to still consider it all fiction. The film ends with the married couple driving to Alaska and it is just beginning to snow as they cross the border, which suits them fine.

The movie was shot in Montreal, Canada.