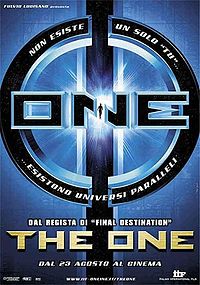 Locandina di The One

The One is a 2001 action film directed by James Wong and starring Jet Li, Delroy Lindo, Jason Statham and Carla Gugino.[1]

A superhuman criminal named Yu-Law, once a member of the organization policing interdimensional travel (via detecting wormhole openings, which can be predicted like the weather), seeks to hunt down and kill variations of himself in alternate universes to absorb a common life force that connects them all. By killing his other selves, (becoming the last version of himself) and absorbing their power, he thinks he will become a god. Yu-Law is briefly captured by MVA agents Rodecker (Delroy Lindo) and Evan Funsch (Jason Statham), only for Yu-Law to escape from captivity during his sentencing thanks to outside help (Carla Gugino)

The only one who can stop him is the last of his alternate selves (MVC: MultiVerse Counterpart), Gabriel Law, who works in the Los Angeles County Sheriff's Department who was unaware of the multiverse. In the attempt to kill Law, Yu-Law starts a fight where he is hiding in an airshaft. After shooting where they believed he was hiding, the Sheriff's Department attempts to move in, but Yu-Law bursts through the metal and takes out numerous officers single-handedly. He then has to flee on foot when more troops move in. He is seen running down the streets from the police. In the end, Law was the only one who could keep up with him, not to mention barely jumping a tall concrete fence. Law then sees Yu-Law who is identical to him in appearance. Yu-Law shoots Law, but is interrupted by Rodecker and Funsch.

Law is situated in a hospital for an MRI scan. Yu-Law infiltrates the hospital to assassinate Law, only to get interrupted by the M.V.A. agents. Rodecker and Funsch split up, with Funsch explaining the Multiverse to Law, explaining that if only one version of Yu-Law is left there will be catastrophic results for the entire multiverse. Meanwhile Rodecker briefly holds Yu-Law at gunpoint only to be killed in a hand-to-hand fight. Yu-Law infiltrates Law's house and murders Law's wife, T. K. (Carla Gugino) and frames him for the murder. The film climaxes after an epic battle between Gabriel and Yu-Law. After Law's victory, Law, Yu-Law, and Funsch get transported back to the Alpha Universe. Yu-Law is transported to a prison colony universe (where he was to be sent in the beginning of the film) after attempting to switch places with Law. The MVA then prepares to send Gabriel back to his own universe where he will be arrested and put in prison, but Agent Funsch against orders from his superiors, instead sends him to a utopia-like universe where Los Angeles is hailed as "America's Cleanest City" and he ends up in the same situation where he met his wife in his home universe. Meanwhile, Yu-Law ends up in the Stygian Penal Colony, a prison planet in the Hades Universe, and immediately begins fighting all the inmates. 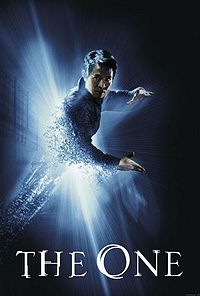 As part of the promotion for the movie, there was an official website for the fictional Multiverse Authority called the "MVA Mainframe". The site, which is now defunct, provided detailed background material on the storyline and some of the characters, including some that were not in the film. Below is the information from the site.

History of the Multiverse Authority (MVA)

The MVA was created in the "Alpha Universe." A prominent U.S. Senator and member of the Senate Parallel Universe Technology Committee named Marcos Rodriguez championed the original Quantum Tunneling Research Project and was instrumental in raising the necessary funds. However, shortly after the first successful Quantum Tunnel jump, Rodriguez was indicted on charges of campaign finance fraud and accepting kickbacks from government contractors. Before he could be brought to trial, Rodriguez was able to access the prototype Quantum Tunneling Device and jump into the "Beta Universe." Due to the infancy of the technology, by the time he could be tracked, Rodriguez had already arranged the death of his Beta Universe "parallel universe version," also a U.S. Senator and had assumed his position.

A former Texas Border Patrol agent named Kyle Browning was hired to head security for the Quantum Tunneling Project and accompanied researchers on many of the first jumps. When one of the researchers made an unauthorized jump to escape from a tax fraud scandal, Kyle Browning successfully retrieved her.

The MVA was formed to address the problems of the new technology and the criminals who were abusing it. Kyle Browning was made Head Field Agent and set in place many of the practices and procedures still used in the tracking and apprehension of criminals in other universes. He also coined the term "parallel universe retrieval," meaning not just the capture of criminals, but the act of escorting them back to the Alpha Universe for trial.

Some time after its creation, the MVA appealed to all major technology producing Alpha Universe countries to contribute personnel and resources to the growing organization.

The MVA's basic mission is to prevent Quantum Tunneling from becoming a tool of crime and to apprehend all those who use it to escape justice and/or alter the affairs of parallel universes.

Field agents of the MVA are divided into two interrelated groups. One group specializes in simple retrievals of Alpha Universe criminals who have used Quantum Tunneling to escape to another universe. The other group tracks criminals who commit "inter-universal crimes" such as smuggling or the termination of one's parallel universe versions.

The MVA is seen using handguns with extremely fast projectiles as well as devices for transferring between dimensions. One such handgun is the M-590, which is also the name of the rifles used in Space: Above and Beyond, another project by Glen Morgan and James Wong featuring Tucker Smallwood and James Morrison.

'The One' has used many tag lines from its production and its theatrical release in both cinemas and its DVD release, in which are the following:

The score by Trevor Rabin was released, but the soundtrack was not.