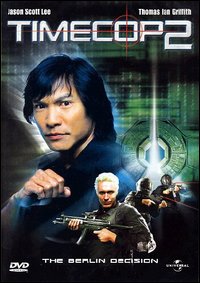 Timecop 2: The Berlin Decision is a 2003 direct to video sequel of the 1994 movie Timecop. The movie stars Jason Scott Lee and Thomas Ian Griffith. The events of this movie take place 20 years after the first film (no mention of the events of the first film, however, and time travel technology has evolved considerably).

This sequel is set in 2025, about 20 years after the original Timecop. At that time, the Time Enforcement Commission (TEC), the agency that monitors time travel, is still working strong. However, as a check & balance to TEC, a "Historical Society of Authenticity" is established to ensure that TEC personnel do not alter history. However, the Society's leader, Brandon Miller (Griffith), believes he has the responsibility to change history based on a "moral obligation to right the wrongs of the past" and plans to do so by traveling back to Berlin during the Nazi era and killing Adolf Hitler to make world better. Ryan Chan (Lee) is sent to stop him, but in the fight that ensues, Miller's wife (also part of the Historical Society) ends up dead when she attempts to shoot Hitler (hence, the "Berlin Decision" title). Miller is arrested and put to prison for trying to change history and Ryan Chan has been arresting Miller's close Society members at present day.

However, one of the TEC agents, on his own, attempts to visit his younger self and violates the physical law "same matter can't occupy the same space". The TEC officer comes back to present day with his younger self merged in his body, and without his existence, a key Brandon Miller Society associate wasn't arrested and it allows Miller to be sprung from prison. Miller then sets out to eliminate all TEC operatives by traveling in time and killing their ancestors, making it so that they never even existed. This way he wanted to prevent anyone from stopping him. Eventually, Chan is the only one left that can stop Miller before he gets to him.