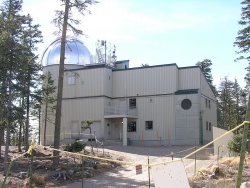 The Vatican Advanced Technology Telescope, aka the VATT, is a 1.8 meter Gregorian telescope observing in the optical and infrared. It is part of the Mount Graham International Observatory. It is situated on Mount Graham in southeast Arizona, and it achieved 'first light', the first starlight to pass through the telescope onto a detector, in 1993. It is operated by the Vatican Observatory, one of the oldest astronomical research institutions in the world, in partnership with The University of Arizona.

The heart of the telescope is an f/1.0 honeycombed construction, borosilicate primary mirror. The mirror was manufactured at The University of Arizona's Steward Observatory Mirror Laboratory[1], which pioneered both the spin-casting and the stressed-lap polishing techniques which are being used for telescope mirrors that include the 6.5 meter aperture MMT and Magellan telescopes and the two 8.4 meter mirrors of the Large Binocular Telescope. The VATT's mirror is unusually 'fast', f/1, which means that its focal distance is equal to its diameter. Because it has such a short focal length, a Gregorian design could be employed which uses a concave secondary mirror at a point beyond the primary focus; this allows unusually sharp focusing across the field of view.

The unusual optical design and novel mirror fabrication techniques mean that both the primary and secondary mirrors are among the most exact surfaces ever made for a ground-based telescope. In addition, the skies above Mount Graham are among the most clear, steady, and dark in the continental North America. Seeing of better than one arc-second even without adaptive optics can be achieved on a regular basis.

Given its excellent optical qualities, the telescope has been used primarily for imaging and photometric work, in which it regularly outperforms much larger telescopes located elsewhere. Among the notable results from this telescope have been the discovery of MACHOs in the Andromeda Galaxy; the validation of the Stromvil photometric filter system; evidence for how the shape and dimensions of galaxies have changed over the age of the universe; discovery of the first binary 'Vesta chip' asteroid; and the characterization and classification by visible colors of some 100 Trans-Neptunian objects, most of them fainter than magnitude 21.

The government of the Vatican City State supports the Vatican Observatory staff and regular research costs, but the cost to build and maintain the VATT itself has come from private donors. The major donors supporting the construction of the telescope were Fred and Alice P. Lennon and Thomas J. Bannan. Benefactors to the Vatican Observatory Foundation[2] continue to support the operating costs of the Alice P. Lennon telescope and its attached Thomas J. Bannan astrophysics facility.